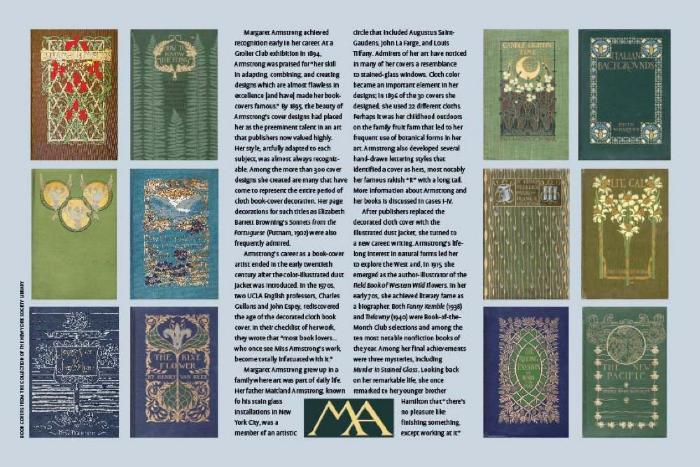 Armstrong’s career as a book-cover artist ended in the early twentieth century after the color-illustrated dust jacket was introduced. In the 1970s, two UCLA English professors, Charles Gullans and John Espey, rediscovered the age of the decorated cloth book cover. In their checklist of her work, they wrote that “most book lovers…who once see Miss Armstrong’s work, become totally infatuated with it.”

Margaret Armstrong grew up in a family where art was part of daily life. Her father Maitland Armstrong, known for his stain glass installations in New York City, was a member of an artistic circle that included Augustus Saint-Gaudens, John La Farge, and Louis Tiffany. Admirers of her art have noticed in many of her covers a resemblance to stained-glass windows. Cloth color became an important element in her designs; in 1896 of the 30 covers she designed, she used 22 different cloths. Perhaps it was her childhood outdoors on the family fruit farm that led to her frequent use of botanical forms in her art. Armstrong also developed several hand-drawn lettering styles that identified a cover as hers, most notably her famous rakish “R” with a long tail. More information about Armstrong and her books is discussed in cases I-IV.

After publishers replaced the decorated cloth cover with the illustrated dust jacket, she turned to a new career: writing. Armstrong’s lifelong interest in natural forms led her to explore the West and, in 1915, she emerged as the author-illustrator of the Field Book of Western Wild Flowers. In her early 70s, she achieved literary fame as a biographer. Both Fanny Kemble (1938) and Trelawny (1940) were Book-of-the-Month Club selections and among the ten most notable nonfiction books of the year. Among her final achievements were three mysteries, including Murder in Stained Glass. Looking back on her remarkable life, she once remarked to her younger brother Hamilton that “there’s no pleasure like finishing something, except working at it.”