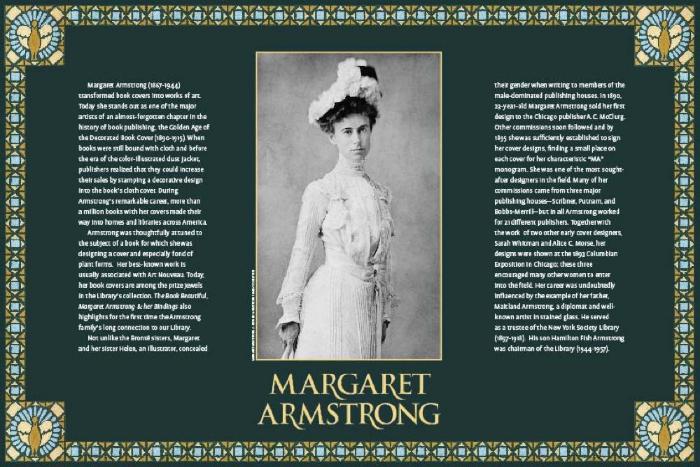 Margaret Armstrong (1867-1944) transformed book covers into works of art. Today she stands out as one of the major artists of an almost-forgotten chapter in the history of book publishing, the Golden Age of the Decorated Book Cover (1890-1915). When books were still bound with cloth and before the era of the color-illustrated dust jacket, publishers realized that they could increase their sales by stamping a decorative design into the book’s cloth cover. During Armstrong’s remarkable career, more than a million books with her covers made their way into homes and libraries across America.

Armstrong was thoughtfully attuned to the subject of a book for which she was designing a cover and especially fond of plant forms. Her best-known work is usually associated with Art Nouveau. Today, her book covers are among the prize jewels in the Library’s collection.

The Book Beautiful, Margaret Armstrong & her Bindings also highlights for the first time the Armstrong family’s long connection to our Library. Not unlike the Brontë sisters, Margaret and her sister Helen, an illustrator, concealed their gender when writing to members of the male-dominated publishing houses. In 1890, 23-year-old Margaret Armstrong sold her first design to the Chicago publisher A.C. McClurg. Other commissions soon followed and by 1895 she was sufficiently established to sign her cover designs, finding a small place on each cover for her characteristic “MA” monogram. She was one of the most sought-after designers in the field. Many of her commissions came from three major publishing houses—Scribner, Putnam, and Bobbs-Merrill—but in all Armstrong worked for 21 different publishers. Together with the work of two other early cover designers, Sarah Whitman and Alice C. Morse, her designs were shown at the 1893 Columbian Exposition in Chicago; these three encouraged many other women to enter into the field. Her career was undoubtedly influenced by the example of her father, Maitland Armstrong, a diplomat and well-known artist in stained glass. He served as a trustee of the New York Society Library (1897-1918). His son Hamilton Fish Armstrong was chairman of the Library (1944-1957).
Share
Contribute
Back to Top